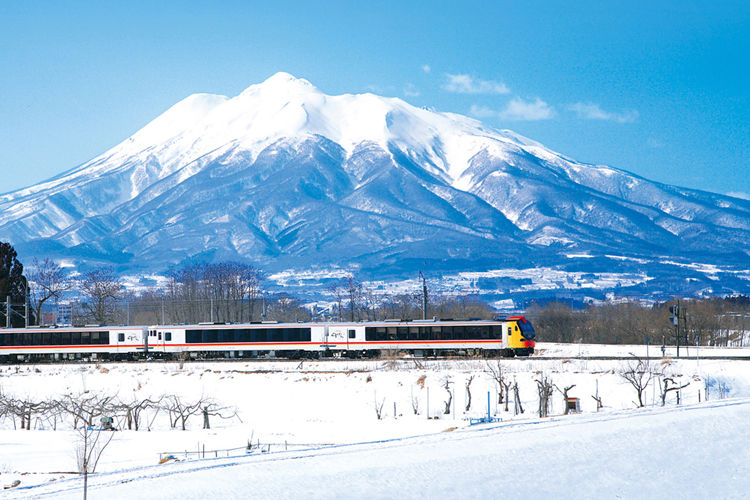 The view from the car window is beautiful.

The Shirakami mountains boast a rich nature chosen as the world’s natural heritage.The resort train which runs along the Sea of Japan in this area is five Noh line “resort.”The distance is 147.2 ㎞ connecting Kawabe station in Aomori Prefecture and Higashi-Noshiro station in Akita Prefecture.Enjoy the beautiful view of the Sea of Japan from the car window.In addition to the Shirakami Mountains along the way, there are many attractions to visit such as “Senjojiki”, one of the most Japan sunsets in the sunset, and the “Twelve Lakes” with 33 large and small lakes and swamps in the beech forest. A traditional puppet theater in the car

When you ride the resort, you will be able to experience the local traditions of the car.One of these is the Tsugaru traditional Kim Tang Mamezou puppet Show, which unfolds in the dialect of the Tsugaru region of Aomori Prefecture.It is designated as an intangible folk cultural property of Liveaboard town in Aomori Prefecture.You can enjoy the comical exchange of Mamezou, fragile in natural hastiness and Kim Tang that only fail in Sakami.The implementation is confirmed on the website of JR East Akita branch. Tales spoken in the dialect of a soft Tsugaru region

One of the attractions in the car is the dialect of the Tsugaru region.This is to tell the story of ancient Tales in Tsugaru.The dialect of the Tsugaru region which is slow and is easy is made to feel nostalgia somewhere.It takes fifteen minutes to talk.It talks from Kawabe station to Mutsu Tsuruta station.Listen to the magnificent Iwaki Mountain, also known as Tsugaru Fuji.The date of implementation is Saturday, Sunday, holidays, holiday, and New Year holidays.Please check the website for details. You can also play the Tsugaru shamisen in the car.

A powerful sound of the Tsugaru shamisen that echoes in the car.It is the live of the Tsugaru shamisen that is always carried out on the day of operation in 1, 2 and 3 of “resort-like”.It is a peculiar way to play with a fast tempo and pounding the bee, and sing a typical folk song such as “Tsugaru-no-no-verse”.It takes about 20 minutes between Ajigasawa Station and Goshogawara station. In addition, the sightseeing experience menu using the stop time is also available.The home of the Noshiro station, which has a high school basketball powerhouse, has a basket goal and a free throw experience during the first and third stop times (not in winter).The 2, 3, 4, and 5 trains stop at Senjojiki Station for 15 minutes, allowing you to wander around the spacious rock mats.In addition, there are various local gourmet on the wayside, and the “Fukaura Tuna steak rice bowl” of the photograph is offered in three small bowls of natural tuna landed in Fukaura-machi, Aomori Prefecture.You can enjoy the sashimi, single-sided grill, and a bowl of tuna.